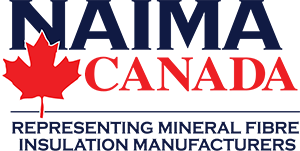 NAIMA Canada is an association for manufacturers of fiberglass, rock wool, and slag wool insulation conducting business in Canada. We were established to promote energy efficiency and environmental sustainability through the use of insulation, to encourage safe production and installation of insulation materials, and to support improved comfort for the occupants throughout the home or building’s lifetime.

He was also awarded Ottawa’s Forty Under 40 distinction which recognizes accomplished leaders under the age of 40 who give back to their community.